Braylee Polson, a junior from Surgoinsville, Tennessee, is a second-semester junior at ETSU majoring in theatre and minoring in dance and entrepreneurship. The Fine and Performing Arts Scholar enjoys being involved in every aspect of theater and combines her interests in both theater and entrepreneurship through her own small business, Once Upon a Party TN. She has directed theater productions for the past four years, including the Kingsport Theatre Guild’s 2019 presentation of “Scrooge: The Musical” by Leslie Bricusse, and served as assistant costume designer for the ETSU Department of Theatre and Dance’s spring production of “Antigone.”

What led you to choose ETSU?

I’ve always really liked ETSU. It feels like home to me. Growing up, so many of my friends saw it as too small or too close, but it was the perfect choice for me. My professors know me and care about me. I’m far enough away from home that I get to have my own life, but I can let my dogs run on my parents’ farm on the weekends. It’s the best of both worlds. I’ve also always been very adamant that I don’t go into debt for an arts degree, so I was very excited to hear about all the arts-related scholarships at ETSU. I was lucky enough to receive a full scholarship as a Fine and Performing Arts Scholar.

Do you plan to stay in this area or move after school?

I’ll have to move away for a little while to gain experience and attend graduate school, but after that, I would love to stay close to this area. I would really like to be a professor here someday or start my own theater company. I tend to dream big, and those dreams always include the people and places I love, so I have a feeling I’ll always be close to home.

What career goals will you pursue after you graduate?

I have so many career goals. I like to try and shoot for Pluto instead of the moon – maybe I’ll actually hit the moon that way! I plan on getting an M.F.A. but am still deciding between an M.F.A. in costume design and directing. I’d love to be the artistic or executive director of a regional theater and maybe start a theater company or two. I’d also really love to be a professor at a smaller university.

You’re already putting what you’re learning here at ETSU to good use in both theater and business, and I understand it’s sometimes a family affair. Tell us a bit about that. 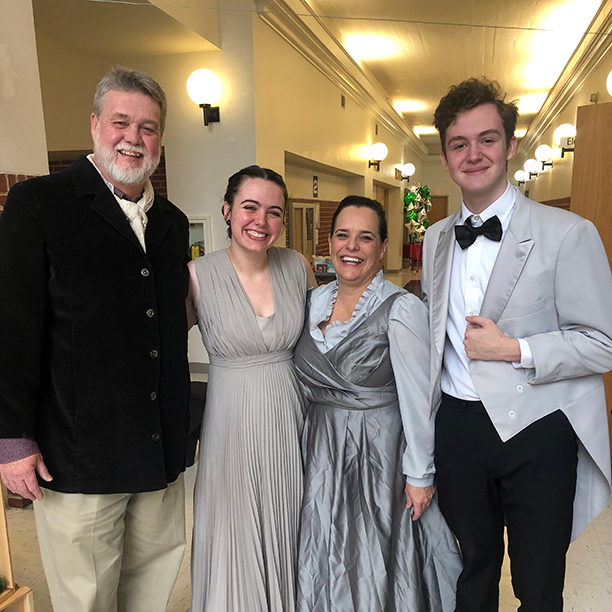 My family kind of just knows at this point that I dream too big for one person, so when I was hired as director of “Scrooge: The Musical,” they knew they’d probably be helping in some aspect. Auditions were a little sparse, so I had my parents, younger brother and boyfriend in the cast. Then, as tech week approached, they got excited with me and started finding new places to help. My dad designed and constructed my set, and my mom pulled and assigned costumes. Before working with Kingsport Theatre Guild, this is how we always put a show on its feet. What was really different and fun this time was my family also being cast in the production. This allowed us to hang out more often and for them to get to be silly and bond with the cast.

And tell us about Once Upon a Party TN.

We are a children’s character company. We select actors and actresses to perform at birthday parties, charity and community events, and the large-scale events we host. My first job in high school was with another character company which, unfortunately, stopped accepting parties. I really missed “princessing” and had some ideas I wanted to try, so I started buying dresses with my high school graduation money. I would go through thrift shops, find dresses that I thought could work for the various characters we offer, pull them apart and sew them back together to create the costumes. I started with all original costumes, but as we’ve grown, I’ve purchased some costumes from professional cosplay websites. Our first few batches of costumes were a little rough, but luckily, I started taking classes in costuming that really helped me. Also, our costuming professor was always so helpful and gracious with any random Princess-related question I had.

Having connections in the Theatre and Dance Department has helped me tremendously with casting my characters and learning the skills to create costumes, while my entrepreneurship minor has been incredibly helpful in teaching me how to keep my company afloat and organized.

The look on a child’s face when they see their favorite character in the whole world is absolutely priceless, and that’s why we do it. I’m a firm believer in magic, and I think that magic comes from good art and pure kindness.

Do you have a favorite memory of ETSU?

I really don’t think I can choose a favorite memory or person, although if you haven’t had the pleasure of meeting Cara Harker (ETSU associate professor of dance), you’re missing out! Everyone I’ve met at ETSU has made me a better person and taught me so much about life. I’ve had such awesome professors who really go above and beyond in teaching us our art forms and how to be great to one another. I was always so afraid that college would be an isolating and competitive environment, but it has been exactly the opposite. I am so fortunate to have found my ETSU family!